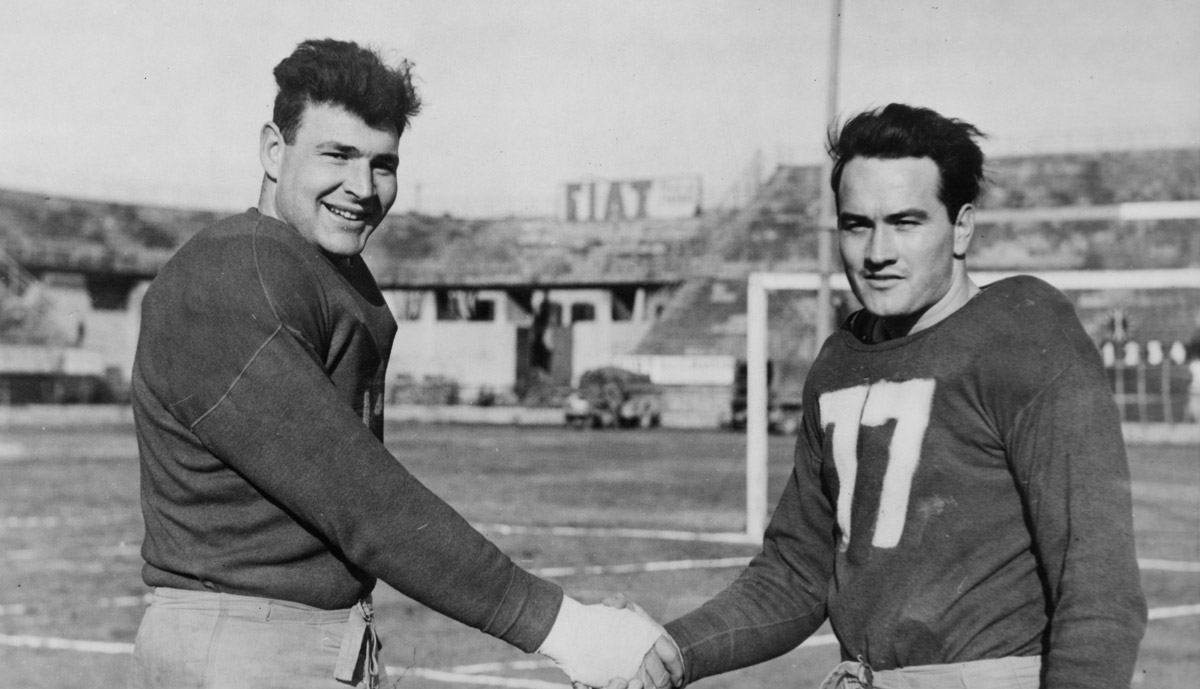 With World War II raging in Europe, the United States 5th Army took on the 12th Air Force in a game of American football. The game was called the “Spaghetti Bowl”, and it took place on New Year’s Day 1945 at the municipal stadium in Florence, Italy, now known as the Stadio Artemio Franchi. During the war, many talented football players from college and professional teams faced a different draft, and were issued new uniforms as they joined the military. Ignatius DeFrancisci from DEMACO, a World War II Army Air Forces veteran recalled: “All the military bases fielded excellent football teams with rosters full of super stars”. Many of these military teams played NCAA colleges as a regular part of their season5. The competition was stiff, with the reputation of their respective military branches riding on the shoulders of the players, motivating them to excel on the field as they battled to garner bragging rights as the toughest service.
The Spaghetti Bowl was a morale booster for those serving in the military, with 25,000 fans cheering on their fellow soldiers and airmen as they clashed on the “grid-iron” football field. Troops were pulled from the region to attend the game over the holiday, possibly including Lieutenant Paul Vermylen of A. Zerega’s Sons, Inc., who was serving on the front-lines in Italy at the time. Lieutenant Vermylen knew all about spaghetti as A. Zerega’s Sons was (and still is) the oldest pasta company in the United States. Although the location was a closely held secret, this bowl game had all the trappings of one played in the states, but with a military flavor. The halftime show included a parade of military vehicles decorated as “floats” and two 56-piece bands. The traditional flyover by a formation of military planes was also part of the program, but on this occasion it was for real as P-38 fighter aircraft loitered above the stadium to ensure no enemy aircraft ventured into the area. When it was over, the scoreboard showed 5th Army 2012 and 12th Air Force 0. For their victory, the Army team received a metal bowl style trophy filled with paper spaghetti. While many Americans learned about pasta by enjoying bowls of spaghetti during their military service in Italy, on that day at the “Spaghetti Bowl”, the Italians learned first-hand about American football.

About the 2022 NPA Annual Meeting