Pasta is good for… the Planet

Earth Day is an annual event celebrated all over the World. Worldwide, various events are held to demonstrate support for environmental protection. 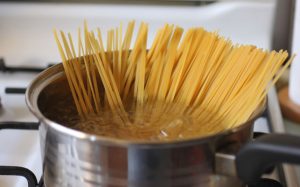 First celebrated in 1970, Earth Day events in more than 193 countries are now coordinated globally by the Earth Day Network.

Did you know that one of the most delicious ways to support a healthier planet is to put more pasta meals on your plate? We all agree that pasta is tasty and good for our health, but as we learn more about the costs and benefits of different food systems, we are also discovering that pasta is good for the Planet.

Because meat and animal products can be a huge drain on natural resources, governments and organizations around the world are advising their members to adopt more plant-based meals, and scale back on meat.

A colorful dish of pasta is one of the heartiest plant-based entrees, and can satisfy even the most devoted carnivores. And for people who are not willing to give up meat, pasta is a great way to take a small amount of meat and stretch it into a satisfying, mostly plant-based meal.

Experts around the world express concern at how we’re going to feed a growing population amidst unpredictable climate and weather patterns.
Luckily, pasta meals are a delicious approach, because the carbon footprint of pasta is only 15.5 oz CO2eq/lb (34.44g CO2eq/kg), much lower than many other foods. The carbon footprint of red meat, for example, is 359.3 oz CO2eq/lb (Diagram 1).
Scientific literature explains that pasta is the right food to feed the planet. From the field to the table, the environmental impact of the pasta is really low, as explained Duncan Williamson, of Wwf Uk, on the occasion of World Pasta Day & Congress 2015.
Researchers estimate that it takes more than twenty times less water to make 1 calorie of food from grains (like the wheat used to make pasta) than it does to make 1 calorie of beef. In fact, even fruits and vegetables need 2 to 4 times as much water per calorie than grains.

At the 2016 World Pasta Day conference in Moscow, Dr. Riccardo Valentini, winner of the 2007 Nobel Peace Prize, explained that «pasta production is quite ecologically positive». Because of this, scientists around the world put forward a consensus statement declaring that «pasta is a simple plant based food, and has a low environmental impact» (Diagram 2).

We can help our Planet also cooking pasta. Indeed, how we cook pasta at home accounts for 38% of pasta’s total carbon footprint. You can help pasta water boil faster and save energy by covering the pot with a lid, and waiting until after the water has boiled to add salt. And we can also save water by trying a one pot pasta meal, or by using the leftover cooking water to make sauces or feed your plants.