Every year, 600 million tons of wheat and maize flour are produced and consumed in the form of noodles, pasta, bread and other flour products. Fortification of industrially produced wheat and maize flour is therefore a simple and effective way of providing the world’s population with vitamins and minerals.Industrially produced flour is defined as products from mills with a capacity of more than 20 t/day.

Nutrients & health
According to the Ffi (FFInetwork.org – Flour Fortification Initiative), nutrients are added to about 30% of all industrially produced flour worldwide. It estimates that 97% of the wheat flour in America, 31% in Africa, 44% in the Eastern Mediterranean, 21% in South-East Asia, 6% in Europe and 4% in the Western Pacific regions are fortified.
The consumption of flour with added vitamins and minerals is a significant step towards preventing micronutrient deficiencies.
The cost of flour fortification is more than made up for by savings in the public health system.
In the United States, fortification is credited with preventing 1,000 neural tube defects a year. Annual fortification costs are approximately Us $ 3 million, and direct medical costs averted are Us $ 145 million per year; consequently Us $ 48 is saved for every dollar spent on fortification.

The countries in blue have legislation for mandatory fortification of wheat flour, maize flour, and/or rice. Source: www.ffinetwork.org, 2015

In the world
One indication of the success of flour fortification is that at least the addition of iron or folic acid to flour is now prescribed by law in 75 States. Three countries follow the recommendations of the World Health Organisation (Who) voluntarily, and in several countries including Turkey, statutory flour fortification is in the planning phase.

How to regulate fortification
There are very different approaches to regulating fortification. It is important to consider the eating habits and nutrient deficits in the country concerned. Some countries fortify all flour with micronutrients, which means that all the resulting products benefit. Other countries treat flours according to the purpose for which they are used, so there are differences between bread and pasta flour, for example.
There are also different recommendations for the minerals to be added. Whereas some countries only specify the quantity, for example of iron, others state which iron compound is to be used, e.g. ferrous sulphate. 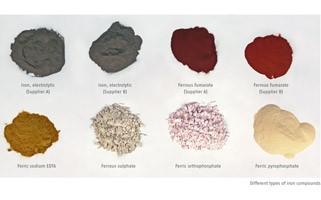 The iron tests
The following tests were carried out because the use of ferrous sulphate is prescribed compulsorily in one Latin American country. When fortified flour was used in noodle production, the boiled noodles were found to have noticeable grey discolouration, which was not acceptable to consumers.
Six different iron compounds were used in the series of tests.

When food stands for health