Home Features From seed to pasta & beyond, genetics is brought… to the table

Semolina and water are the ingredients needed to produce the queen of the Mediterranean diet: pasta. Easy, right? Not really, because semolina comes from durum wheat, which is genetically very complex. Experts say that «its genome contains many more genes than human genome». 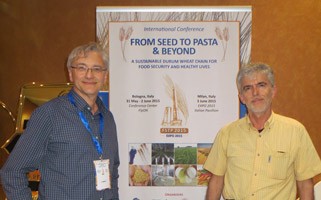 Aldo Ceriotti (Cnr, on the left) with Roberto Tuberosa (University of Bologna): they planned the event “From seed to pasta & beyond”

Therefore it is not surprising that researchers are extremely interested in durum wheat, as it is the key ingredient of a food product that will meet the future need for global food security – due to its features such as shelf life, easy transport, possibility to meet people’s different tastes, as it can be paired with various sauces, and nutritional traits. In other words, pasta can feed the planet.
Upon one condition, though: having enough durum wheat. And this is the problem: although being well known in the Mediterranean area, durum wheat is cultivated in just a few other areas of the world, mainly Canada and the US. Moreover, crops are declining. Solutions must be urgently found to ensure production, to improve yield and quantity – wheat used for pasta production must have a given protein content – and, possibly, to create varieties resistant to diseases and extreme weather conditions. To put it in one word, it is research. Experts suggest that «we cannot feed the planet while respecting the environment and biodiversity unless we invest in research». 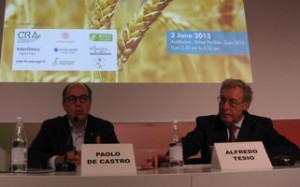 On the left, Paolo De Castro, Permanent Rapporteur for Ttip with the US, with Alfredo Tesio from the Foreign Press Association in Italy

An event… to feed the planet
This philosophy has underpinned the international conference “From seed to pasta & beyond” (www.fstp15.com) dedicated to durum wheat, which gathered many experts from the durum wheat-pasta industry to present and discuss the results of researches aimed at increasing durum wheat production, while reducing environmental impact and improving pasta quality and healthiness.
Strongly supported by Roberto Tuberosa, Professor at the Department of Agricultural Sciences of the University of Bologna (Italy), and organised by Avenue Media, the event took place in Bologna from May 31st to June 2nd. The last day of the conference, on June 3rd, was held in Milan, at the Italian Pavilion of Expo. On this day, the round table “Challenges and perspectives for durum wheat and pasta production” saw the participation of international researchers, as well as Paolo De Castro – former Italian Minister of Agriculture and Chair of the Committee on Agriculture and Rural Development in the European Parliament, and currently Permanent Rapporteur for TTIP (Transatlantic Trade and Investment Partnership) with the US in the area of agriculture – and Furio Bragagnolo, Chairman of Pasta Zara, the second Italian producer of pasta and first Italian exporter.