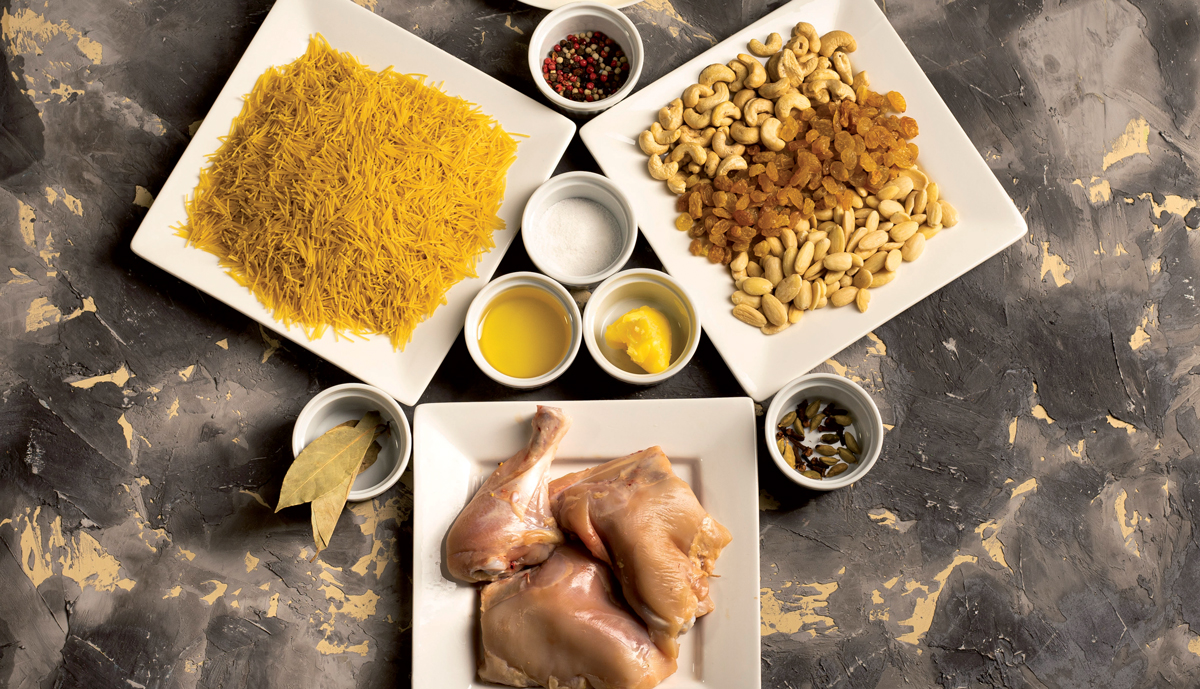 The various shapes of Libyan pasta

Pasta is an essential part in the Libyan cuisine. It is considered one of the pillars of this kitchen, especially that this meal in its various forms is cooked almost daily in this kitchen.
However, the Libyan kitchen has its own way of cooking it. We would like to offer you three forms of serving this food in the form of three meals. The first form is served as Vermicelli pasta; the second form is served through pasta served with a Libyan special sauce called albasla; the third form is presented through the Embakbaka, which is considered the most famous.

Innovative ways of cooking to give importance to this ingredient

Vermicelli pasta with nuts is a quite popular Lybian dish. To prepare it, you need: one kilo of meat or chicken (pieces), 400 grams of vermicelli pasta, 150 grams of almonds, 150 grams of cashews, 20 grams of raisins, 100 grams of butter, bay leaf, cardamom, black pepper, cloves, 100 ml of vegetable oil, salt (as desired). You can make this meal in this way: boil water in a pot and put in it (bay leaf, cardamom, black pepper, cloves) with salt, add the chicken pieces and leave it to boil for half an hour. Meanwhile, you put the amount of butter in a pan and fry the almonds, cashews and raisins separately until they acquire a golden-brown color. After that, chicken pieces are taken and reddened in the oven or in a frying pan, and another pot is placed in which the oil is placed and the vermicelli pasta are fried in it until they acquire a light color, add the chicken broth and flavorings with salt and leave for 15 minutes until they are cooked and served on a plate and put the roasted chicken pieces with roasted nuts and serve. 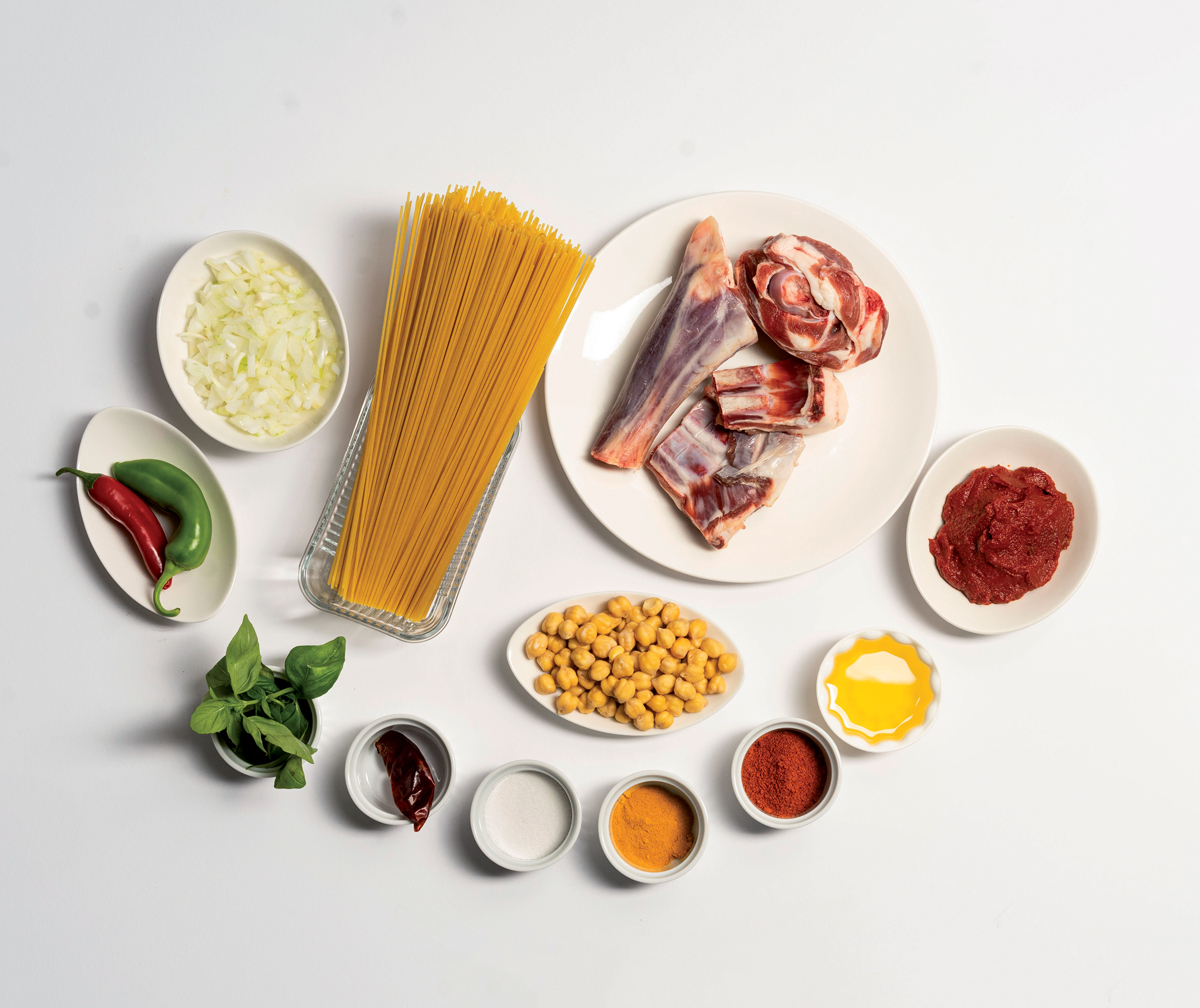 The second form is Pasta with Libyan sauce (albasla). To prepare it you need: 500 grams of onions, 500 grams Rushta, 500 grams of lamb, 3 tablespoons of tomato paste, 20 grams of soaked chickpeas, 1/2 teaspoon of paprika, 120 ml of vegetable oil, salt (to taste), 1 teaspoon of ghee, 1 teaspoon of cinnamon, 100 ml of water blossom. You can make this meal in this way: put an appropriate amount of water in a saucepan with couscoussier and put in water the oil, tomato paste, paprika, turmeric and salt until it starts boiling and then put the meat, then close the pot with the couscoussier and first put the soaked chickpeas in it and then the chopped onions (julienne) until it is completely wilt with steam. After the onions have matured, take it out off the couscoussier, and the couscoussier is brushed with oil.
Then the rushta is placed in the couscoussier to start maturing with steam for 20 minutes. Then take the rushta out of the couscoussier as the meat is ready, so take the fat of the broth and add it to the rushta and mix it with hands until it acquires a golden color that is slightly reddish, then a small amount of broth is added to the rushta with a simple pinch of salt and a pinch of cinnamon, and the rushta is returned to complete its maturity over water steam for 30 minutes until it is cooked, and finally add ghee with a sprinkle of cinnamon and blossom water In the meantime, the (albasla) is prepared by adding meat broth to the chickpeas to have the (albasla) sauce that will be placed on the top of the rushta in the dish after it is cooked with the meat pieces and a simple cinnamon sprinkle on the face. 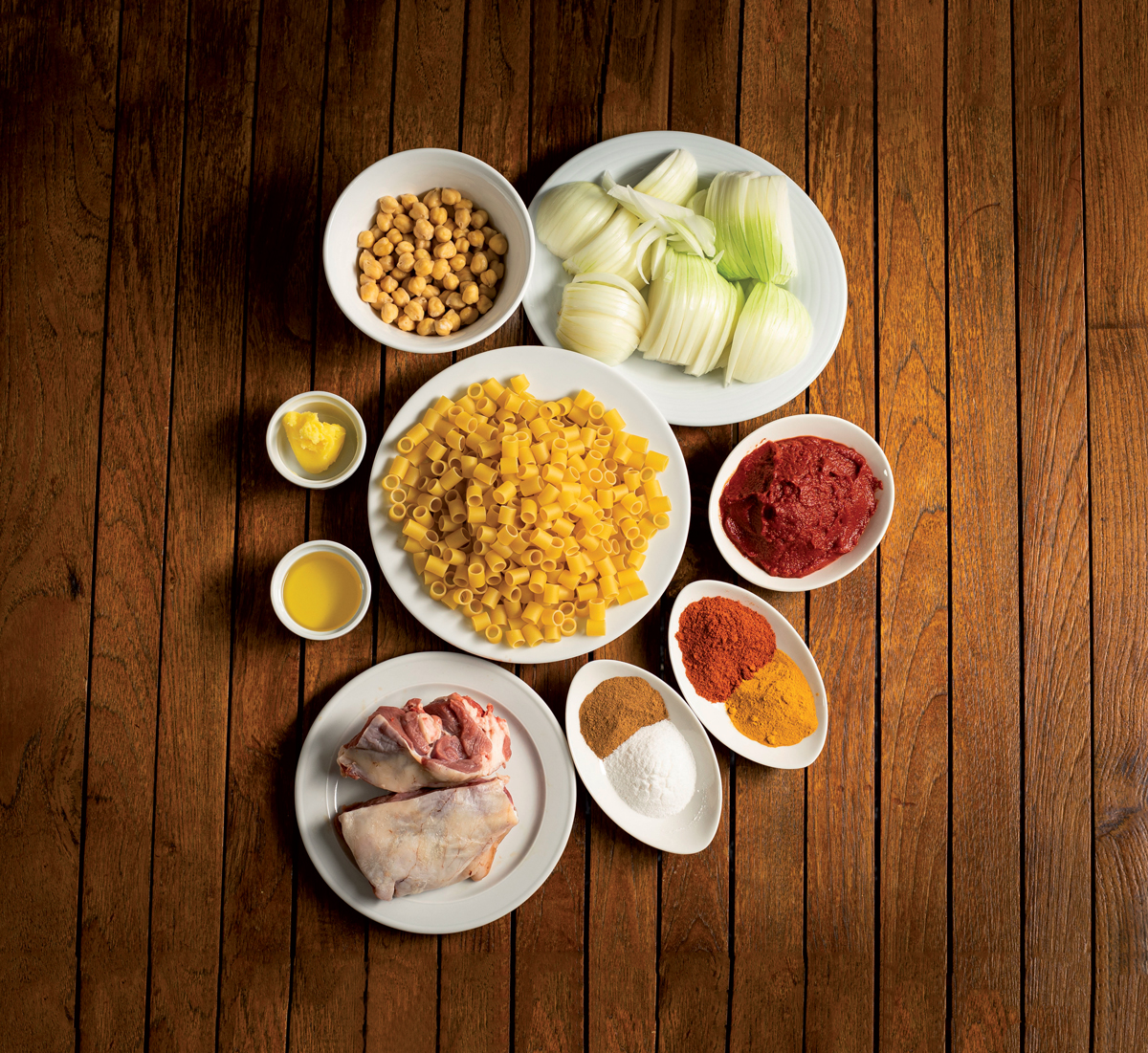 The third form is Embakbaka (with lamb). To prepare it you need: 500 grams of lamb, 400 grams of pasta, a large onion, two cloves of garlic, medium potato, 20 grams of soaked chickpeas, two tomatoes, one green pepper, one smoked pepper, basil, 80 ml vegetable oil, 2 tablespoons Tomato paste, half a teaspoon Paprika, 1/2 teaspoon turmeric, salt (to taste). You can make this meal in this way: put a saucepan on a medium heat, pour oil, chopped onions and soaked chickpeas, add tomato paste, paprika, turmeric and salt, stir the mixture well, then add the lamb meat and stir until the meat takes on a slightly light color, then add an appropriate amount of water and leave to boil for 40 minutes, then add Chopped potato, chopped tomatoes, green pepper and smoked pepper. Leave the broth to boil for 15 minutes. After the meat has matured, add the pasta to the broth and let it boil until it is cooked, add garlic cloves and serve.